Why are people in poverty? 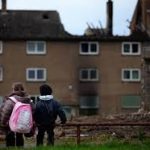 There is no doubt that there is greater inequality in society in the light of covid: 56% of the public think so:      https://www.theguardian.com/inequality/2021/mar/11/majority-think-covid-has-increased-uk-social-inequality-survey-shows

This is not in doubt. But why are people poor? Why did some lose out most during covid? A similar study (from the IFS/Kings College London) published a couple of weeks ago, came to similar conclusions overall, but with some important variations on where and on whom this impact fell – https://www.ifs.org.uk/inequality/wp-content/uploads/2021/02/unequal-britain.pdf

This study came up with a quite startling finding: “Nearly half – 47 per cent – say that an individual’s performance at work is important in determining whether they lost their job at this time, compared with 31 per cent who say luck is an important factor.”

This points to a spread of attitudes at the core of public reactions to poverty and inequality. There are crudely, three views on poverty –

The take up of Hope’s food poverty services has massively increased during the covid period (3fold), and Hope itself made a handful of redundancies last year, all driven by economics, not personal factors. In general, our observation would be that whilst personal factors may play a part in some cases across the UK and locally, this growth in unemployment simply cannot be attributed to the performance of individuals at the level the 47% above believed. The idea that all Debenhams staff (to take just one example) lost their jobs because of underperformance is simply absurd. They lost them because of structural reasons, not personal ones. This makes the 47% believing it was due to personal issues like underperformance as needing further analysis.

The structural view of poverty, that generally speaking is our experience, is re-inforced today by the views of the UN Special Rapporteur on Extreme Poverty and Human Rights, Olivier De Schutter: https://www.church-poverty.org.uk/speaking-of-poverty-differently/

Mr De Schutter is clear: “Poverty has often been pictured as attributable to the individual, but we should see it instead as a failure of society. To combat poverty, we should not shame or penalise people in poverty“. This structural view is also supported in the link by Church Action on Poverty.

There are clear faultlines here in public attitudes. Not all of the 47% of the public referred to above who believe there are personal reasons for unemployment are unkind, of course, in their approach to poverty: many would attribute addiction and mental health as ‘personal’ causes of unemployment and they do not lack compassion for these ‘personal’ causes. Some people in that category are supporters of Hope because they see those reasons and want to ensure that there is help available for people affected by them, as they know Hope will help people in these categories. But there are clearly many other people  who believe that people bring poverty on themselves through laziness and indolence, or some other failing, and those narratives of a ‘low-life’ population of scroungers are fuelled by some media and social media coverage.

Hope knows, in its engagement with people in poverty six days a week, that there are multiple, complex reasons for poverty. But we know that a significant chunk of people who lost their jobs because of covid lost them because of covid’s wrecking ball damage to the economy, not their own fault. Seeing them as substantially personally responsible is not a narrative we share, nor endorse. They are victims, not the cause.