Literature and homelessness: a Japanese (and Northampton) perspective

Rugby fans in Northampton (and of course, there are a few of you out there!) who are watching the world cup, alongside cheering on England, may well have had their hearts melted by the Brave Blossoms of Japan.  As tournament hosts their run to the quarters has been inspiring. Alongside that, people who have been out to Japan to watch matches are all returning with stories of how lovely a place Japan is: its culture, the people, the welcome.

As a long time Japanophile I have been fascinated too with the culture: the temples, the gardens, music and art. That took me to reading ‘Tokyo Ueno Station’ by Yu Miri, recently published in the UK. It’s an attempt to put a life behind the faces of homeless people, in this case, those who live in the huge tent encampments in Ueno Park, home to the city zoo and many museums; I’ve seen them myself. It tells the incredibly moving story of how one man came to be there, a man who never had any luck, as his mother says in the book, and who ends his days inside a cardboard shelter in his old age, invisible to the crowds and tourists around him, a man there perhaps, as he says, because he could never really cope with the pain – or joy – of life.

It’s a book of great humanity: as its blurb says, it gives voice to the voiceless, by an author who is herself an outsider, of Korean ethnicity, in a society that struggles with migration. It’s a valuable addition to the canon of homelessness literature, and the story it tells, though Japanese, it’s truly transferrable to any culture. Homelessness is the same in any developed society. 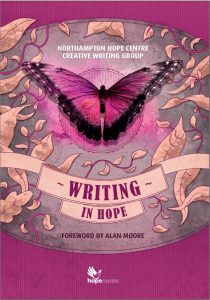 And whilst we are thinking about literature, don’t forget that copies are still available of the book of writing from people in Northampton who attend our day centre: ‘Writing in Hope’. It’s written by local people with lived experience of their own pain and joy in life; of addiction, of homelessness, of a wider set of personal issues: but the book is both funny, joyful, heartfelt and sad at different times. It’s worth reading too. You can order copies at £10 by ringing us, from our ebay page, or from the charity shop on Abington St.