how we calculate the number of rough sleepers in Northampton

What is a rough sleeper? What is a street homeless person? It’s terminology affected by all kinds of influences, ideological ones in some cases. We classify anyone in this category if they have nowhere proper to sleep on a regular basis and who therefore sleep outside in the open air or in places not suitable for sleeping: doorways, pavements, cars, boats, broken down buildings, sheds, tents, garages, crack houses, under trees, under railway or road bridges.

One of the few achievements of the covid crisis is the fact that a significant number of people previously sleeping rough have now been housed through the work of Hope, the local council and housing organisations. It is great news. The downside was that as covid hit, we all realised there were far more people in that category than anyone ever knew – possibly up to 120 on any night, across the whole covid period, 200 people were rough sleepers at some point.

Whilst the numbers have come down dramatically, there are still lots of people in poor housing circumstances.

The number goes up and down, but the number of rough sleepers has been between 6 and 15 since April this year on any given night. Beyond that are many, many people in very poor housing circumstances, sofa surfers included. When we say 40 including rough sleepers, this reflects those surfer surfers amongst the overall number who have the most insecure status.

Our knowledge comes from our detailed engagement with rough sleepers and other homeless people. We are open six days a week and each day a significant number of people come in to our services, and we will be told the general type of location where they are staying: if they are street homeless as above; or what’s called a sofa surfer, someone who sleeps on a friend or family member’s bed or floor, in temporary or hostel accommodation; are housed, or just passing through. We discuss information with the council daily and the numbers given above reflect a definitive view on numbers. Sometimes you will see quite ludicrous figures quoted – 25-120. This are not based on reality. There may be 120 people who turn up for free food in the town centre, if its on offer, but we can look at the pictures and identify who is housed. Such images reflect poverty and need, but not homelessness.

Some are somewhere between the various categories: they sleep on a sofa one night, then on the street, then back on another sofa. It’s often a fluid lifestyle. For some desperate women, and a few men, that temporary night inside might be conditional on sexual favours expected by their host, which sometimes, out of desperation, to avoid bitter cold, other exploitation or violence outside, they accept. Yet we make a distinction when we give numbers. We do not count sofa surfers amongst rough sleepers, unless they have been sleeping on the street on a regular, recent basis.

We often do not know precisely where rough sleepers are sleeping, such as under which bush or which bridge or which tree – people are cagey and fear being arrested, deported, harassed or having their tents destroyed. If we did know where they slept on a specific day, they may have moved the next. It’s none of our business to know exactly where they sleep, other than to advise them in general terms, how to stay safe and which type of place is safer.

If someone rings in and says there is a person sleeping at place X, we ALWAYS advise them to contact the council to report this.

Where we get our data:

People who come into our day time provision for rough sleepers during the week and at weekends.

SWEP data:  When we ran SWEP – the severe weather emergency protocol shelter – we had a significant number of people sleeping on our floor. All of them were street homeless, not sofa surfers. We know that months on, many of the SWEP attendees are still sleeping rough.

We liaise closely with the Council on whom they believe are homeless, and with other organisations.

We also get told about other people, sometimes in great detail, who never come in to our centre, which we add to the data, as well as reporting them to the council: 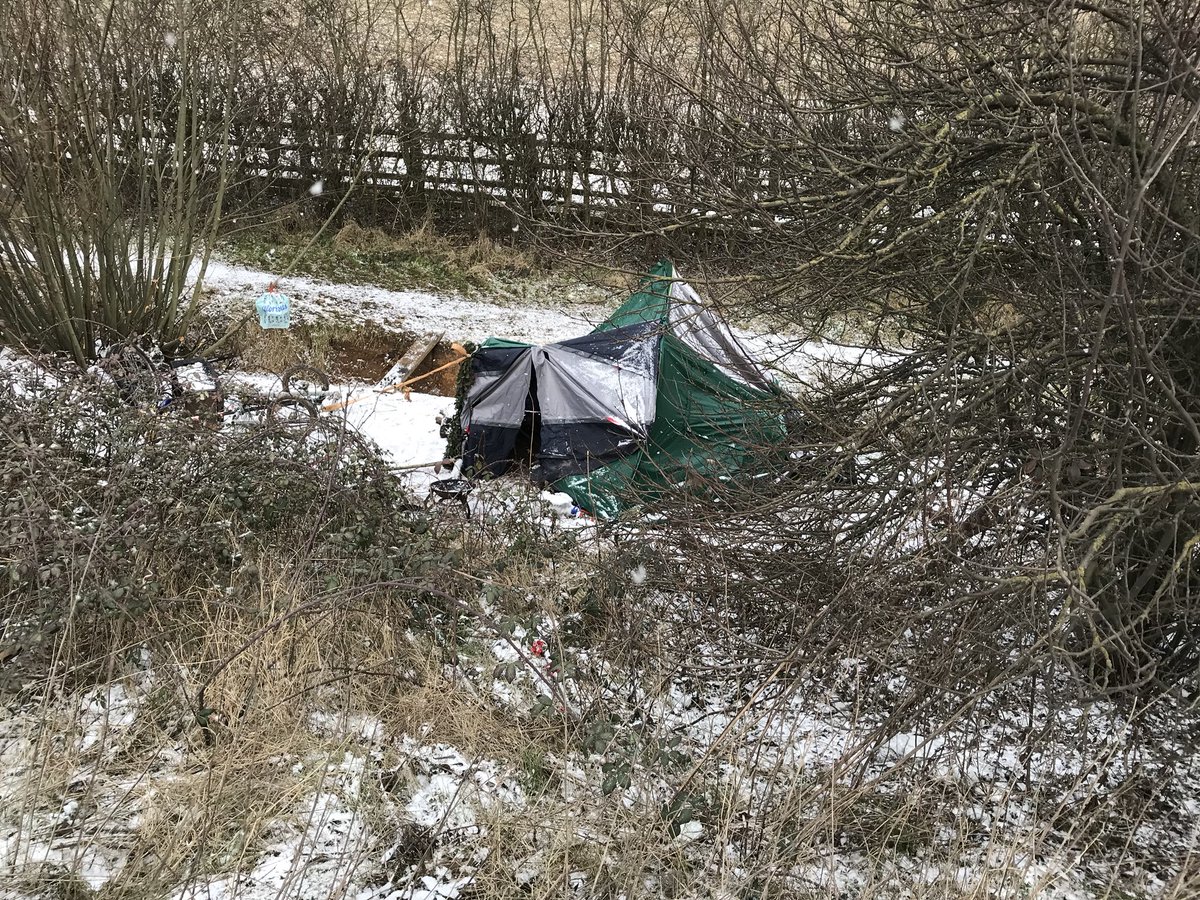 A tent by the A45 in Northampton in March 2018. The man who lived there, whose name we know, never came to the centre. He was eventually housed.

Triangulating and assembling and checking these data, we can create a list of names of people whom we know are sleeping rough at any one time. Its this analysis that enables us to give the figure we are currently reporting. We report conservatively, so that even if our data suggest more, we will only report absolutely confirmed cases in our media, including this site.

We welcome independent evaluation of the data we use.

The current number of 40 is not an exaggeration. It’s evidenced.

there are lots of ways that you can support us